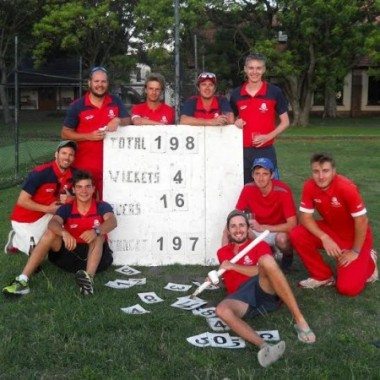 Third year Modern Languages student and former Palatinate Sport editor Nick Friend spent his year abroad in Argentina, coaching and working for the Argentine Cricket Association. Here, he talks about his time there and the ICC’s attitude towards its associate and affiliate members.

The last six months have been an eye-opener. You think of Argentina, you think football – Messi, Tevez, Maradona; you think food – beef, chimichurri perhaps; then you’ve got tango, the improving Pumas rugby team, Patagonia’s stunning glaciers and the almighty Iguazu Falls.

It would be easy to laugh at such a concept, given the International Cricket Council’s (ICC) apparent commitment to preventing expansion of its own sport. Yet, it exists all right – and it thrives – albeit up against the gigantic arrogant barbed-wire obstacles erected by the ICC to fund the ever-cushy lifestyle of the BCCI and further increase the gap between full ICC members and its associate and affiliate friends.

Just seven years ago, competing in ICC World Cricket League Three alongside Afghanistan and Hong Kong – both of whom competed at this year’s Twenty20 World Cup, Argentina fell nineteen runs short against the Afghans. Now the darlings of world cricket and flying the flag for the mistreated and neglected, pinup boy in-chief Mohammed Nabi, captain Asghar Stanikzai and head-banded opening bowler Hamid Hassan all featured at the Hurlingham Club in Buenos Aires in that crucial victory on Afghanistan’s sojourn up the cricketing ladder.

Indeed, these are the minute margins on which seasons, livelihoods and careers are moulded. Nineteen measly runs. That, though, is sport.

What followed was a difficult period for Argentine cricket; relegation from Division Three was followed by similar falls from Divisions Four, Five and Six.

And this is where it stops. Not because Argentina are languishing in World Cricket League Division Seven, but because there is no such thing. Beneath Division Six lies a bottomless pit in which 71 of the 105 full, associate and affiliate members lie; clinging on for dear life, hoping beyond hope for a rope to be dangled down, for an opportunity to replicate the Afghan miracle. Yet, as the sport’s Big Three get richer, so too do the rest get poorer. The razzmatazz of the recent World T20, somehow, overshadowed the tournament’s shoddy planning and, frankly, abhorrent disdain for the associate nations.

The pre-Super-10 phase was a fitting tribute to an organisation whose interest in the game’s developing nations seems to diminish by the tournament. Ireland, Oman, Scotland and the Netherlands all had their qualification fate decided for them by the rain, despite having qualified last year. Attendances were nothing short of abysmal – perhaps not helped by the decision to begin sales less than a week before the whole shebang began. The ICC defended the pre-Super-10 phase, claiming it as part of the tournament proper. Yet, the stats tell a different story. The official tournament statistics ignored all wickets taken and runs scored in the less glamorous stage, preferring to present a Virat Kohli-headed list to the hundreds of millions of television viewers.

One of the main reasons for the ICC’s desire to remove associate nations from world events is the embarrassment caused by the one-sided maulings. Once again though, the joke was on them. Afghanistan were the only side to beat the eventual winners, the West Indies. South Africa couldn’t defend 229 against England and India were skittled for 79 by New Zealand in two displays so inept that even the most unproven of associate nations would have struggled to replicate them. Meanwhile, runners-up England were perilously positioned at 85-7 against Nabi’s men, who also gave the South Africans an almighty scare. The improving Bangladesh side contrived to snatch defeat from the jaws of victory against the underwhelming Indians, and Mustafizur Rahman was unearthed as, by far and away, the best bowler of the tournament. Ireland, so vocal in their desire for Test status, were humbled by little Oman – a Division Five side until three years ago.

What is amazing about all these stories is how, with even the schedulers against them, the little nations continue to thrill, continue to compete and continue to shock. In reality, it appears that this is the big problem facing the associate nations today. Not their inferiority whipping-boy status, but the opposite. As every giant-killing is egged on by neutral fans and raved about by broadcasters, each one hits the ICC like a dagger through an embarrassed heart – as if a proud parent watching his extensively coached child boxer getting knocked down by the raw streetfighter. Their absence from future World Cups is, essentially, a punishment for spoiling the rich kids’ party. Back in Argentina, cricket is by no means the national sport of a country infatuated by competition and riddled with sport-obsessed youngsters; packed full of all the hand-eye coordination that so many of us Brits lack. Football will always reign supreme and no number of runs or wickets will ever change that. Rugby too, driven by the Pumas’ success at last year’s World Cup and the Jaguars’ addition to the Southern Hemisphere’s Super Rugby league, is providing yet another barrier to cricket. Yet, in recent years, the two have learnt to coexist. National captain and keeper Alejandro Ferguson played for the Pumas age-group teams until he was nineteen and Belgrano Athletic Club, the country’s biggest amateur rugby club, share their facilities with the national cricket ground. The ground is a central hub for the sport, with a strong crop of genuinely talented young cricketers coming up through the ranks and into the club’s first team. Pablo Ferguson, brother of the national skipper, leads the side featuring several players in the elite players’ pool.

In head coach Daniel Sutton, Martin Siri, Lautaro Musiani, Lucas Paterlini, Esteban MacDermott amongst many others, Argentine cricket boasts some fantastic talent – all of whom can claim to having shared a pitch with England’s Darren Maddy and new MCC coach Steve Kirby as well as Messrs Nabi, Hassan, Stanikzai and Shenwari of Afghanistan. New Zealand’s heralded coach Mike Hesson, too, honed his coaching methods as Argentina’s head coach, while the annual 3-day game – now in its 117th consecutive year and pre-dating the Ashes – continues to hold great significance in the cricketing calendar. With a Uruguayan side coming over in 2018 to commemorate the 150th anniversary of the continent’s first ever game between the two countries, it is undeniable that Argentine cricket is bursting with tradition.

And this is why the current predicament is so farcical. Vanuatu, Botswana, Guernsey and the Phillipines – all of whom find themselves ranked above Argentina, would kill for a history as rich and fruitful. Argentina haven’t even played since 2014, such is the ICC’s lack of interest in looking after the schedules of its developing members. Tradition appears to count for nothing when it comes to maintaining the glory of the game outside of the world’s elite. In the entire country, there are six astro-turf wickets and two grass squares. Batsmen routinely hand their bat over to a teammate after being dismissed. This image paints a grossly inaccurate and lopsided view of the country’s cricketing community. It is, and has long been, built on the wealthy classes, who discover the game as part of the English curriculum at their bilingual private schools.

Yet, this goes well beyond the point at hand. Over the next seven years, the ICC are due to rake in $2.5billion in profit, with $586million of that going straight into the BCCI’s pocket. Simply, it is a farce that verges on the fraudulent, especially when you consider that just 9.75% of the overall takings between now and 2023 will be shared amongst all 93 associate nations. A five-minute highlights reel of the World Twenty20 proves that there is immense talent amongst the developing nations – and on the most meagre of ICC rations, even with the best efforts of both Wade Edwards and Tom Humphries of ICC Americas who, for all of their time and efforts, are puppets whose strings are being ever tightened. Imagine, though, what could be done with a rational and fair budget!

Since its conception in 1995, Argentina have dominated the South American Championships, winning the tournament on eight of the twelve occasions of its hosting. The level of the elite players, I am happy to admit, massively shocked me. For, with the ICC’s total lack of promotion of the game outside of its money-spinning televised extravaganzas, how was I to know? So strong are the Argentines in comparison, they now only send a development side. Despite this, they crushed Brazil by eight wickets in last October’s final, chasing 135 with 5.4 over so spare.

All of this proves that the on-field future is bright. What goes on in the background, in offices thousands of miles away from the rough and tumble of beautiful Buenos Aires is less obvious. Funding for the associate nations is on the down and opportunity for international progress is at an all-time low. What will not change though is the passion, competition and love of the game that makes Argentine cricket so unique. I am immensely proud to say that I was there and that I worked with and for some tremendous people in the most fantastic of countries. I’d go back in a heartbeat.

If you are in first year, studying Spanish as part of your degree and love cricket, don’t hesitate to contact Nick at nicholas.friend@durham.ac.uk for more details of the job.

“I just loved it – De Glanville on Durham